One does not need an excuse or a reason to make a cocktail. Sometimes, “it’s Tuesday” is enough. But sometimes, it’s fun to have some inspiration and make a celebration behind the art of cocktail hour. St. Crispin’s Day is a perfect example of taking a little known holiday that falls on the anniversary of the Battle of Agincourt and provided the inspiration for William Shakespeare’s famous St. Crispin’s Day Speech, as delivered by the king to his troops in the play King Henry V:

“And St. Crispin’s Day shall ne’er go by,

From this day to the ending of the world,

But we in it shall be remembered –

We few, we happy few, we band of brothers.”

So, grab your “band of brothers,” ideally in person, but a video chat, phone call, or even text message works, and hoist this drink I created in 2021 to celebrate the day, and just because I felt like having a cocktail. 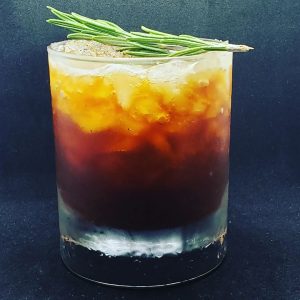 This style of cocktail is close to a cobbler, which is loosely defined as a drink with spirit, sugar, crushed ice, and fruit – the “cobbles” are the crushed ice pebbles. It is a Pre-Prohibition category of drink whose popularity increased with the availability of drinking straws, which were a novelty at the time. It’s often considered the first shaken drink, and is famously mentioned in Charles Dickens’ The Life and Adventures of Martin Chuzzlewit.

I chose the cobbler as inspiration based on a pun: saints Crispin and Crispinian are, among other things, patron saints of shoemakers and cobblers.  I omitted actual pieces of fruit in lieu of some citrus juice and a bar spoon of marmalade, and added a sprig of rosemary in lieu of the more traditional mint, as its flavor profile better matches that of the Averna used in the drink.