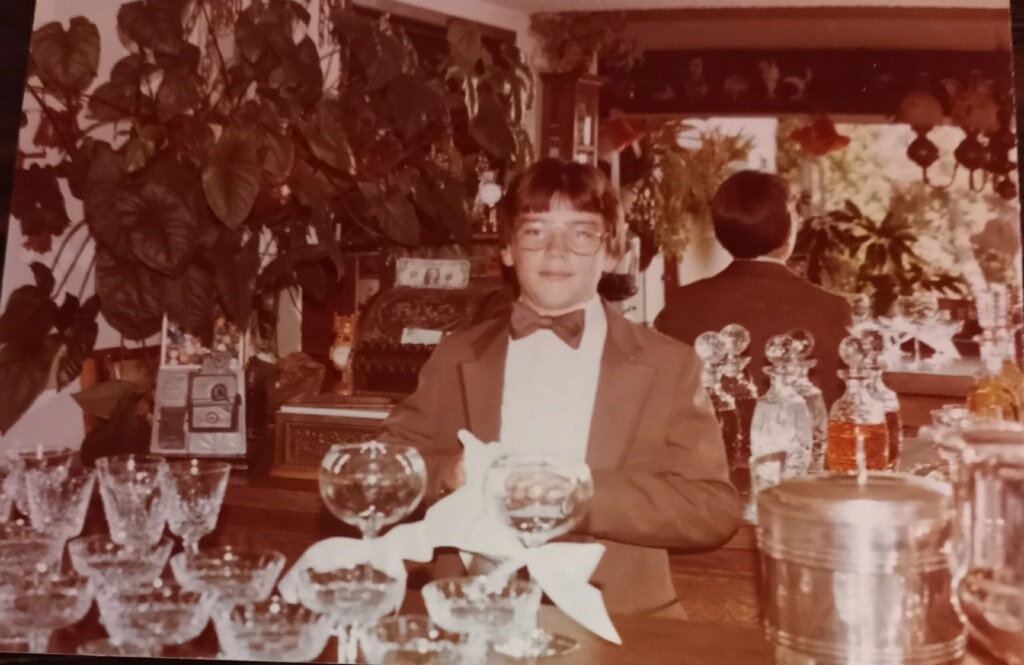 How I got started making cocktails

To get our freshly pressed creative juices flowing, each of the three founders of Cocktail Cadre is writing about how they got their start in the world of cocktails.

That sounds terrible, but it wasn’t all that bad. 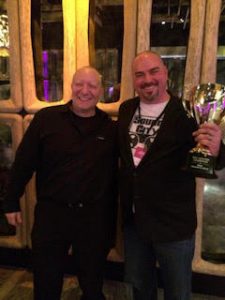 My father and stepmother were fans of the drink through most of my formative years, but not on a problematic level. Both were concerned with their health back then (my father was a part-time Kung-Fu instructor as a side-hustle until I was in my teens), the two of them had rules about when they drank, which was mainly on Friday and Saturday, but by Sunday, they would wind things down as they headed back into the workweek.

I don’t remember a lot of cocktail drinking from the two of them during this time; it was mostly about wine and straight alcohol in the form of shots. I remember many Sunday Mimosas at various brunches, but that was about as complicated as it got.

I can recall my father trying to make what my sister and I drank at restaurants fancier by requesting that the wait staff added a lot of Maraschino cherries to whatever we were drinking, which was usually soda of some sort or another. Back then, the true mark of a good bartender was if the cherries came attached to a little plastic monkey perched on the side of a Collins glass. The occasional Shirly Temple or Roy Rogers cocktail was ordered back then, but I think my sister enjoyed those more than I.

It was around this time I recall stepping behind the bar for the first time. I was at my father and stepmother’s post-wedding party, which took place at the house of my father’s best friend’s in-laws’ home. It was there I invented my first cocktail, The Coke and Collins, which is precisely what it sounds like, a mix of Coca-Cola and Collins mix, a syrupy lemonade that came by the “handle” back then, but has fallen out of favor in these days of bespoke cocktails.

My childhood home in Paramount, California, had a full wet bar in the den, but I don’t remember spending much time back there, as it was rarely used.

These days, my stepmother still enjoys the occasional glass of wine and, despite my complaints, “vodka Martinis” (don’t get me started), and my dad stopped drinking years ago due to some medication he takes regularly.

I started drinking in my teens when I was part of an outside-of-school drum group composed mainly of older kids (high school and college). I don’t necessarily say that proudly; I know I shouldn’t have been drinking at that age, and on a few occasions, I put myself in some odd predicaments thanks to alcohol, but I don’t regret anything (as far as I know).

That drinking continued when I joined another group, DeMolay, a Masonic-based youth organization designed to keep impressionable young men (and women in other, adjacent groups) out of trouble. The drinking took place mainly at parties and after-parties and rarely spilled over into the official events (at least for me).

These days were mostly filled with cheap beer and bad cocktails that were barely cocktails at all. Drinks like “Rum and Coke” without any attempt to make it a proper Cuba Libre or a Screwdriver with the orange juice mainly added for color and no precise measurement.

By the time I turned twenty-one (the legal drinking age in California), drinking alcohol was pretty typical but far from refined.

One of my early cocktails was on a trip to Las Vegas with my father and my childhood friend, Vito Ippolito. After sitting down at a blackjack table on our first morning, a cocktail waitress appeared and asked what we wanted to drink. Not wanting to sound like a kid, I ordered the first thing that came to mind, a Bloody Mary. It was awful. It’s amazing I ever drank a Bloody Mary again.

What showed up was a watery combination of cheap Vodka and Bloody Mary mix with a sad spike of an olive and a lime wedge. I took a big gulp to “get the party started” and regretted it immediately as it tasted like something someone had shaken Vodka with what was leftover in the tin from a previous cocktail. I distinctly remember not finishing that one.

Racking my brain for something else to drink, I ordered a Tequila Sunrise, a mix of tequila, orange juice, and grenadine syrup.

I loved it immediately. Given its sweet profile, the Tequila Sunrise aligned nicely with my soda-drinking ways while still serving as an alcohol delivery vehicle. I stuck with them all weekend.

Not long after that, I recall attending a U2 concert at The Forum in Inglewood, California, with fellow Cocktail Cadre founder Martin Thomas, whom I also met in DeMolay during my travels to other chapters. Like my Vegas trip, in an attempt to sound more like a grownup at the cocktail bar, I ordered the first thing that sprung to mind: a Gin & Tonic.

These days, I love a great G & T on a hot day by the pool, but, then, similar to my first exposure to the Bloody Mary, I’m amazed I ever touched them again (in fact, I didn’t for years after that). As I would discover, “Well” gin (i.e., the cheapest gin a bar carries) at The Forum was a poor place to start with my exposure to gin. Additionally, most of the time, the Tonic found in your typical bar “soda gun” (these days, a more rare device outside of ancient cocktail bars) was long expired and flat as The Edge’s singing…

My wince after my first sip was apparent, and I switched to beer for the rest of the show.

For years after that, most of my drinking was focused on beer as the “Craft Beer Movement” crawled across the United States. I got into wine as I started traveling for business and was exposed to finer restaurants than I could afford on my meager salary.

During my 30s, I started drinking Sidecars, a tasty mix of cognac, orange liquor, lemon juice, simple syrup, and sometimes, lime juice. I can’t recall the source of learning about this old-school cocktail, but it was most likely in a men’s magazine on a shortlist of drinks to order in front of women to avoid looking like a slob on dates. For a long time, The Sidecar was my “acid test” for the quality of a good bartender, figuring that if they didn’t know how to make the cocktail, they could be trusted with little else. This time was before the “Cocktail Movement” in the United States and most of my travel abroad when I was exposed to a wider variety of cocktail options.

Also, during my 30s, I started dating a red-haired Scottish woman named Rachel, who oddly preferred a glass of cold Vodka and introduced me to Scotch during a trip to her homeland. Before Rachel, my home bar had started to form, but it truly began to take shape when we moved in together. It was also around this time that I started experimenting with cocktail making at home. 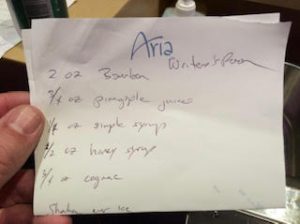 I don’t recall the exact time I started making cocktails, but it would have been around my late 30s if Rachel was around. The Cocktail Movement was creeping Westward from New York. I was already into cooking, so most of the cooking magazines and TV shows I watched back then incorporated cocktails into their content. So I started incorporating cocktails into my party menus at my newly acquired home in Burbank, California, where I still live today. Rachel and I weren’t made to last, but my interest in cocktail making continued onward.

Martin will tell his own story; however, the two of us did come into cocktail making around the same time, which encouraged the habit even more. Like Martin, I think it appealed to my meticulous nature in the same way cooking, baking, and many of my other hobbies always have throughout my life. Plus, it was a hobby that created something you could share with friends while showing off a bit at parties and dates.

In 2014, I attended what I thought was a cocktail-making class at an epicurean event in Las Vegas that turned out to be a cocktail-making competition that was filmed but never aired for The Food Network. The showrunners paired each of us with a local bartender of some note, who was supposed to guide us during our challenge of creating a new cocktail using only the ingredients made available to us that day. However, my bartender spent most of his time flirting with two other participants, so I went to work independently.

During some of my studies of older cocktail books, I stumbled across a classic known as The Algonquin, a unique mix of rye whiskey, dry vermouth, and pineapple juice that had long fallen out of favor in cocktail bars years ago. Grabbing the pineapple juice from the available ingredients, I set about making a riff on the classic using bourbon instead of rye, my old friend from my Sidecar days, cognac, and honey syrup.

I also tried to make a margarita variation using pineapple juice and accidentally re-invented The Matador Cocktail, another favorite of mine I usually make on Cinco de Mayo as an alternative to the poorly made margaritas that haunt bars that day.

Our assigned bartenders were also tasked with choosing who in the sub-group of competitors would move on to the competition judges, a collection of some of Las Vegas’s finest bartenders from the most prominent hotels. When the bartender finally took a break from his flirting and turned to me to ask what I had come up with, I presented both of my creations, and he instantly pointed to the Algonquin riff and said, “That’s the one.”

His only advice was to shake the ingredients harder and with more ice so that the pineapple juice frothed like a flip-style cocktail, and we had our entry. The Algonquin Cocktail was named for a writer’s group that met at New York’s Algonquin Hotel, so I called my riff “The Writer’s Room Cocktail.” (Ironically, the bar from the long-closed Algonquin Hotel ended up in a restaurant in Toronto, Canada, named Southern Accent, where my partner, Ellen, got her start in restaurants as a waitress).

The judges’ table suffered through many a lousy cocktail that day, barely making any notes about the various entries along the way. However, when I presented my admission, they finally woke up.

“The Algonquin?” one judge asked, “Are you a professional bartender?”

“No,” I replied, “I’m just a drunk.” The bartenders all laughed and took notes for the first and last time during the competition. I knew then I had a shot at winning this thing. 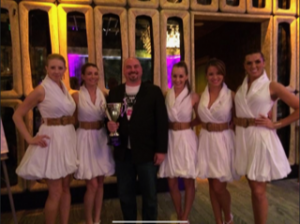 When the judges announced the winners, I was declared the winner. The prize was the honor of having my drink live on the Aria hotel bar for the rest of the year and a ridiculous trophy that still proudly sits in my library today. I was also awarded a gift card to the hotel where I stayed, covering most of my room expenses from the trip, a nice bonus for what was already an ego-boosting win.

I have yet to enter another amateur cocktail competition, but Martin and I have volunteered our cocktail-making skills to a few fundraising events over the years (behind the bar is officially my favorite place to stand during fundraising parties now).

Years later, I met my partner, Ellen, a bartender of some note at Los Angeles’ famous Largo Theater, and is now the General Manager of L&E Oyster Bar in Silverlake, California. She doesn’t make cocktails much anymore, but when she does, it’s from memory and a lot more fun to watch than I will ever be.