Encounter at Farpoint: A Cocktail for the Anniversary of Star Trek The Next Generation

I created this cocktail in September 2020 to celebrate the 33rd anniversary of the debut of Star Trek: The Next Generation on September 28th, 1987. 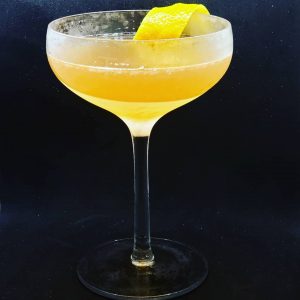 The Encounter at Farpoint cocktail

I call this one “Encounter at Farpoint.” Star Trek: TNG introduced a lot of different drinks to Star Trek lore, including Klingon Blood Wine, the Cardassian favorite Kanar, and Aldebren Whiskey (“It is… it is green.”). But perhaps no other beverage is as associated with TNG than “Tea, Earl Grey, Hot.” In honor of Captain Picard’s favorite beverage, I made a drink with equal parts brewed Earl Grey Tea, Diplôme Gin from France as a tribute to Picard’s French heritage, and some fortified French wine in the form of Lillet Rose as a nod to Picard’s family vineyard in France. I also added a small quarter ounce each of lemon juice and honey syrup. Lastly, I used a smoking glass to smoke some Earl Grey tea leaves and then built my cocktail in the smoking glass.

While I grew up catching an occasional episode of the original Star Trek with Kirk and Spock on TV after school or on weekends during its syndicated run, I didn’t become a fan of the show until shortly after high school, when I spent a summer at my friend’s house watching two seasons of VHS recordings of the show that another friend let us borrow. My friend was particularly excited for the debut of the third season, and I humored him by watching the previous two seasons, but grew to love the show and, in particular, the relationships of the characters. Since then, I’ve watched all each series multiple times, own most of them on DVD or Blu-Ray, and I’ve read books and comics, played role-playing games, and listened to music from the show. 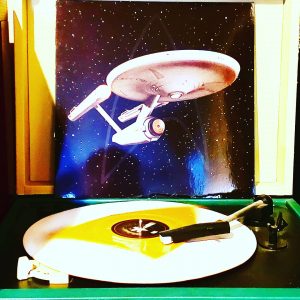 One of the favorite things I’ve done over the past few years was re-watched the entire run* of Star Trek: The Next Generation with my daughter, starting when she was around 7 or 8 years old. It took us a while to get through it, as school, ballet, and Girl Scouts took priority. But, we finished the entire thing and it was shared time with her that I will never forget.

While I don’t own any Star Trek: TNG music on vinyl, I do have this fun Star Trek 50th Anniversary Theme Song on die-cut vinyl.